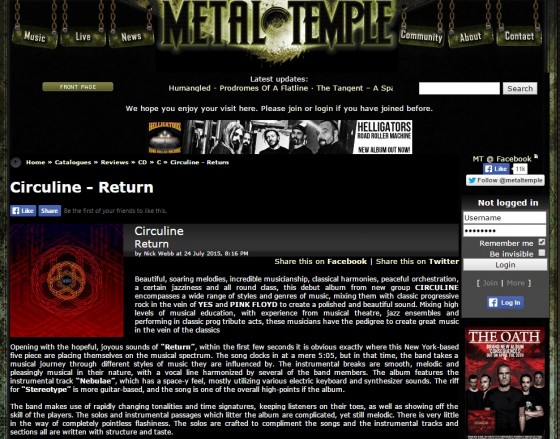 “Beautiful, soaring melodies, incredible musicianship, classical harmonies, peaceful orchestration, a certain jazziness and all round class, this debut album from new group CIRCULINE encompasses a wide range of styles and genres of music, mixing them with classic progressive rock in the vein of YES and PINK FLOYD to create a polished and beautiful sound. Mixing high levels of musical education, with experience from musical theatre, jazz ensembles and performing in classic prog tribute acts, these musicians have the pedigree to create great music in the vein of the classics.”

“Opening with the hopeful, joyous sounds of “Return”, within the first few seconds it is obvious exactly where this New York-based five piece are placing themselves on the musical spectrum. The song clocks in at a mere 5:05, but in that time, the band takes a musical journey through different styles of music they are influenced by. The instrumental breaks are smooth, melodic and pleasingly musical in their nature, with a vocal line harmonized by several of the band members. The album features the instrumental track “Nebulae”, which has a space-y feel, mostly utilizing various electric keyboard and synthesizer sounds. The riff for “Stereotype” is more guitar-based, and the song is one of the overall high-points if the album.”

“The band makes use of rapidly changing tonalities and time signatures, keeping listeners on their toes, as well as showing off the skill of the players. The solos and instrumental passages which litter the album are complicated, yet still melodic. There is very little in the way of completely pointless flashiness. The solos are crafted to compliment the songs and the instrumental tracks and sections all are written with structure and taste.”

“Overall this album is melodic and progressive in the more classic style, reminiscent of PINK FLOYD and some of DREAM THEATER’s mellower moments, so one for fans of tasteful and complicated music.”