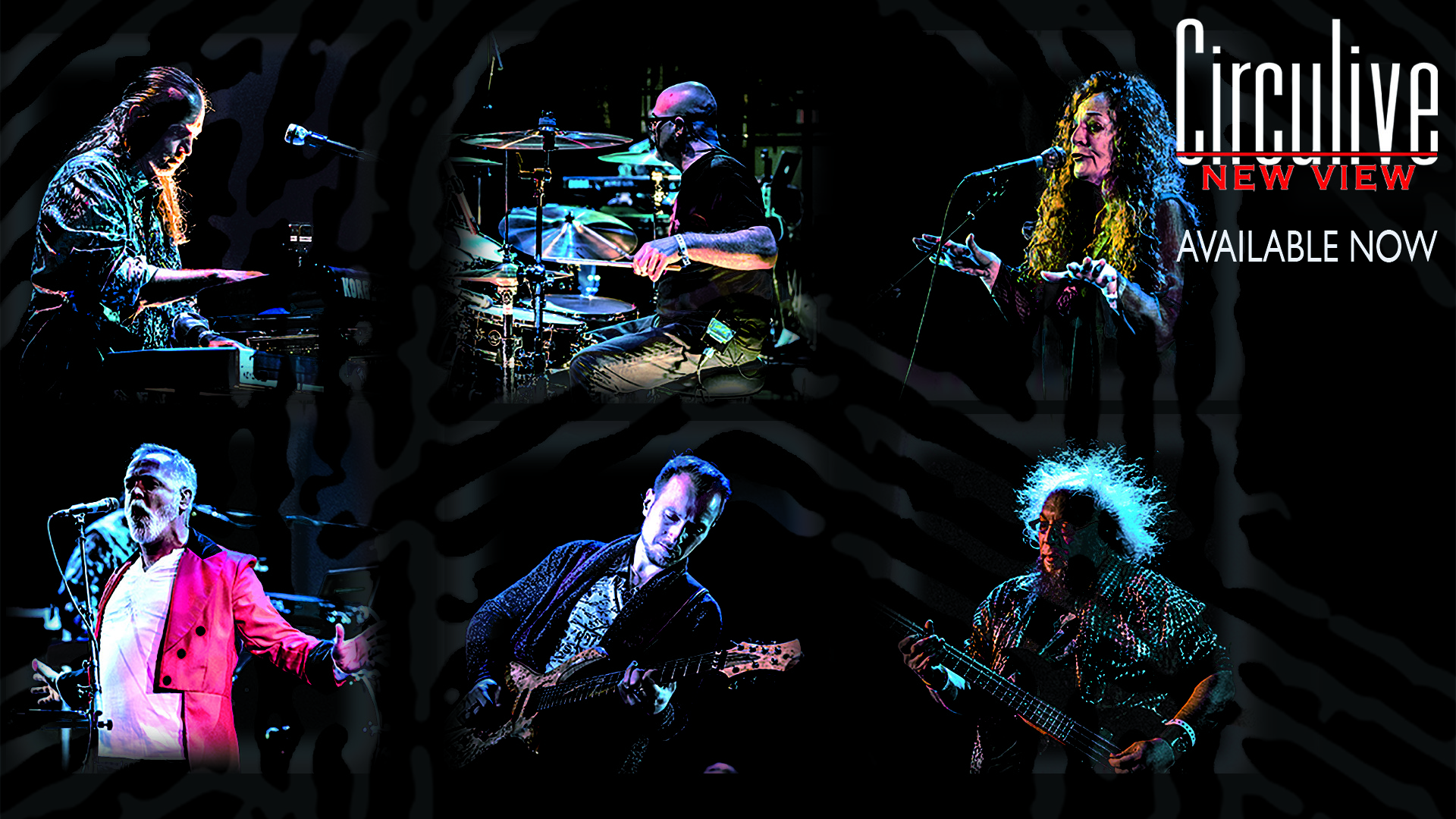 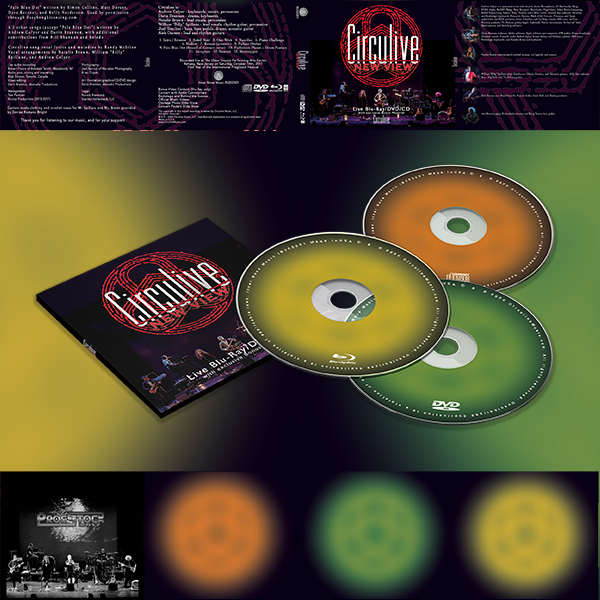 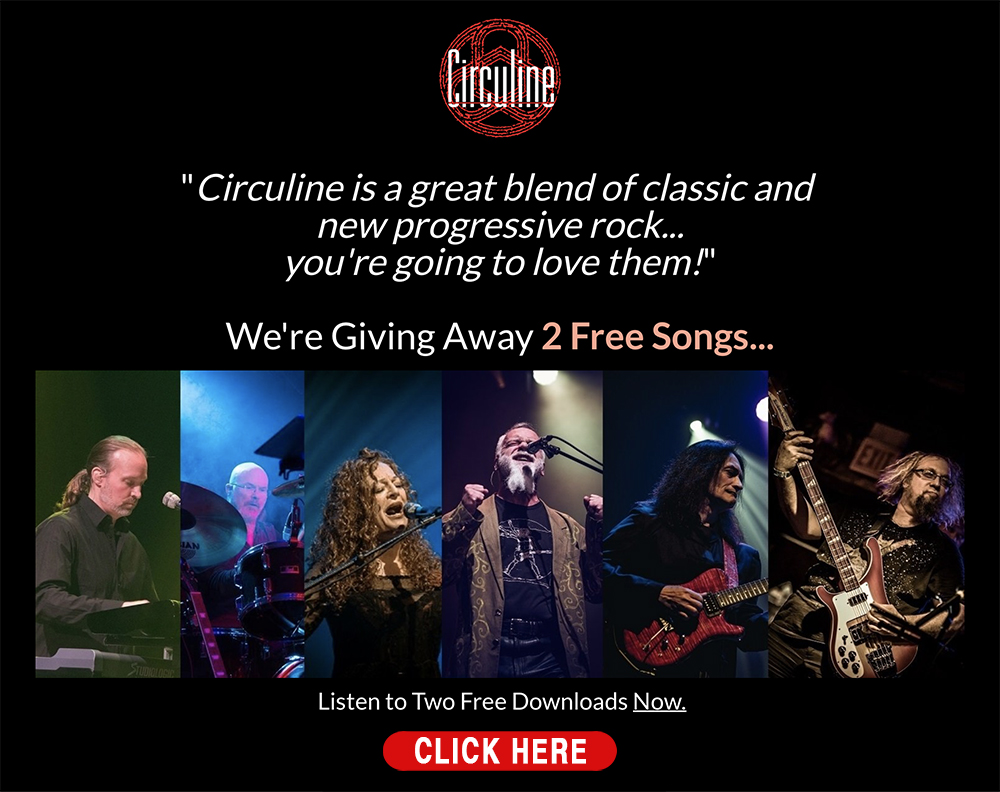 Thank you so much to Background Magazine’s Henri Strik and Tracy van Os van den Abeelen, for this FANTASTIC review!  We are reprinting it here IN FULL, and if you want to read it on their website, the link is included at the bottom of this post. 😀
~

For many lovers of progressive rock living in the USA is Circuline a rather well known name. However for those living on the other side of the Atlantic ocean this name doesn’t ring any bells for most of them. They don’t know that they started early 2014 and released already two studio albums. Namely Return (2015) and Counterpoint (2016). This sextet from New York occasionally does some live performance in their country and also wants to climb the stage in Europe. But as with many bands from North or South America it is rather difficult to reach their audience outside their home country and see them face to face. Therefore it is sometimes a good way to come with a live release. This also occurs for Circuline. Therefore they decide to come up with a second live release in their career after putting out Circulive::Majestik back in 2018. So it’s now time to welcome Circulive: New View. It’s a release which is without any doubt a great bundle to own. Why? Because it brings out the audio and video on CD, DVD and Blu-ray in one package. How cool is that!

The whole release is rather entertaining and gives us a cross-section of their already mentioned two studio albums. There is also one composition written by Sound of Contact, namely Pale Blue Dot. A great version if I may say so. Moreover we have the great Piano Challenge between Andrew Colyer and Darin Brannon. A medley with scraps of classical music as well as excerpts of Tarkus (ELP) and Awaken (Yes). Also nice is The Drum Feature that follows the soundscape-like Forbidden Planet. Instead of just letting the drummer go behind his kit on his percussion, everyone taps, drums or plays on a percussion instrument. Nice for variety and as a show element and is something which Gentle Giant and Lazuli have also done on stage.

For me it is the instrumental parts such as in Fallout Shelter, Forbidden Planet and Stereotypes that appeal to me very much because everyone has mastered their instrument well and radiates pleasure playing. In addition to the pointed but delightful guitar solos, the classical piano playing and the flashy bass playing on the Rickenbacker are particularly striking. Off course it doesn’t mean that the songs in which the two singers are included are the worst compositions done. Both singers have strong voices and add really something to the band.

All in all you can say that the keyboards stand out, and you can tell who is holding the strings here. But the guitar work is not neglected either and supported by an excellent rhythm group.

The DVD contains the same material as the CD, but the Blu-ray offers additional video content: concert with audio commentary, backstage and behind the scenes material, official videos, onstage photo slide show and concert poster slide show. So the fan gets a lot of material here and will be thrilled.

In the end Circuline offers the fan the best-off par excellence but also the perfect live album which will obviously delight all the followers of the group but which will also serve as a starting point for all those who want to discover this great American band. This is a real must for fans of Glass Hammer, Renaissance, Magenta and Yes! And of course for lovers of progressive rock in general! Well done indeed! Next time please get to the other side of the Atlantic!!!

Thank you so much, Music Connection Magazine and Eric Harabadian, for featuring Circuline in your November 2020 Livestream Reviews, for our 15-date, 45-Event NewView Virtual Tour!

We are reproducing the entire article here for your ease of reading:

Material: Circuline is a modern rock band that puts the emphasis on harmony, melody and good song structure. Drawing heavily from the progressive rock tradition, they jam with the best of them. But the melodic essence of their tunes is key, and will resonate with you for some time to come. Shades of YES, ELP, The Moody Blues, early Jefferson Starship, Curved Air, Steve Hackett and many other elements factor into their unique and original sound. The theatrical sci-fi-like “Forbidden Planet,” “Inception’s” stratospheric arc, the jazzy “Summit” and the incredibly cinematic “Stereotypes” display the wide range of this mega-talented troupe.

Musicianship: The merging of several ingredients and disciplines creates their cauldron of creativity. Colyer is a Juilliard-trained pianist who mans an impressive bank of keyboards. His composing, arranging skills and ability to coax a plethora of otherworldly sounds out of his instruments is jaw-dropping. The same can be said for Brown and Spillane’s front line vocals. Their singular and harmonic exchanges provide a rich and exciting choral effect. Brannon’s drumming intrepidly weaves through all the accents and tempo shifts providing back beat, and even stepping out front for a solo spot. Darson comes from the Hackett/DiMeola/Fripp school of guitar and, along with the versatile low end of Simches, rounds out this ensemble in a grand manner.

Performance: From September through early October 2020 the band has been promoting their new album “Circulive” with an exclusive Facebook Live “New View Virtual Tour.” Via their FB site, audiences have been treated to video premieres and behind-the-scenes online chats where the band talks live about the making of the videos. These weekly installments really seemed to connect with fans as the chat room was consistently active and engaged. The video premieres showcase the band performing at various venues in the U.S. and Europe. Throughout these performances there is a true team spirit that is evident. Everyone checks their ego at the door and the result is a shared experience between the ensemble and their audience.

Summary: Circuline is a progressive rock band that seems to really connect with their fans. And, during these unprecedented times, this “New View Virtual Tour” further displays their “out of the box” resolve and approach.

The digital online version of this article was originally published on October 26th, 2020. Here is the link:

Thank you so much, MUSIC IN BELGIUM and reviewer Philippe Thirionet, for this fantastic 4-Star (out of five) review! We’re reproducing the entire article in English, via Google Translate, below.

It is indeed an ultra complete Live box set that is given to us by the New York group Circuline which since 2015 has been navigating between progressive rock, cinematic rock or even crossover-prog and classic-rock with here near of 13 compositions available in 3 distinct formats. So let’s dive into this imposing preciousness with first of all the analysis of the CD opening on an intro then, the music of the group begins with first of all a nice bass sound that serves as a door to ‘entry to a rather classic rock-progressive with also modern and atmospheric synths which, offer a very melodic note to American rock … a progressive in fact where the synths twirl sometimes recalling the great Genesis . Between the songs it’s Natalie Brown who thanks the audience and suggests the songs that will be played. But enough talk, I therefore offer you two first ‘promo-clips’ to listen to, to discover the group and its music:

Where we perceive a rock both tinged with folk, progressive but also classic-rock since here, we find acoustic passages like certain more neo-classical moments, when the piano is heard. Overall this is a music that represents well it seems to me an accessible and multifaceted rock because obviously, the group is able to tack between genres while keeping in focus the will to build a Classic-rock where we feel the imprint of the seventies via the sound of the organs without counting, neo-classical or progressive scents see heavier passages come to flesh out the sound content of our Americans. And I have not yet talked about the vocal part where, the song of Natalie is regularly added to choirs carried by one or the other protagonist who accompanies the beautiful, song and vocal harmonies perfectly complementing the musical picture of this concert given in fact in 2017!  In fact you could find other promotional extracts on YouTube but what I offer you is a complete composition resulting from this stage performance:

This will allow you on the one hand to see the impressive material on stage (you will be able to see it again of course when the DVD is broadcast) and on the other hand, a complete performance next to a song dating from 2016 with also beautiful instrumental passages! The whole album is in the image of a colorful performance where each protagonist is in his place, masters his subject and therefore offers a musical game and / or a vocal work without reproach while remaining in a rather classic niche. rock or progressive.

Other extracts are of course available, I offer you one by the way, with one of the last compositions of the concert captured for the occasion:

Clean and well done work that does not suffer from any false note, but let’s move on to the DVD which obviously offers us an additional dimension with the image of the scenic performance which shows us even better all the logistics on stage but especially all the professionalism developed by the whole group. The sound-image capture is impeccable and therefore worthy of a quality DVD, the same of course for the Blu-Ray version which perfectly complements a most complete and successful box set!

In the end Circuline offers the fan the best-off par excellence but also the perfect ‘Live’ album which will obviously delight all the followers of the group but which also, will serve as a starting point for all those who want to discover the American formation. In terms of classic-rock, classic progressive and American rock, this is a must!

This article was originally posted online on November 22nd, 2020: