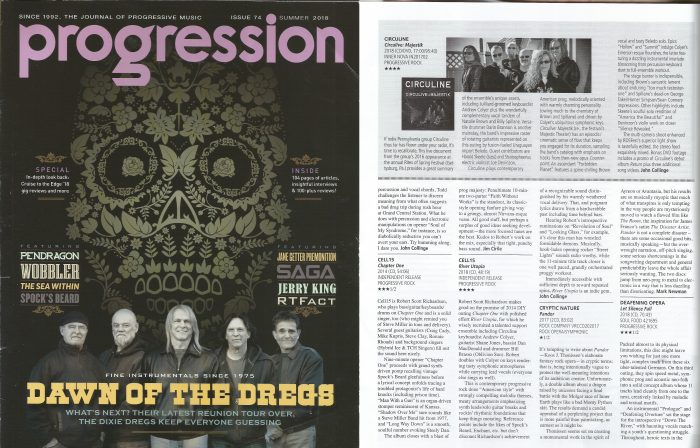 “A great summary of the ensemble’s unique assets…..impressive…..contemporary American prog, melodically oriented with charming personality…..has an episodic/cinematic sense of flow that keeps you engaged for its duration…..spine chilling…..tasty…..soulful…..tastefully edited…..exquisitely mixed.”

Thank you so much, Martin Hutchinson of Prog Radar, for this great review of CircuLive::Majestik!!

“Highly impressive progressive rock act…..dramatic and powerful performances…..bombastically brilliant…..raises the hairs on the back of my neck…..well shot DVD draws you in and makes you feel as if you are part of the whole experience…..soaring to the heights of The Majestic’s roof…..in this spellbinding show, it’s not just a concert, it really is like going to the theatre to watch a musical extravaganza and Circuline really deliver that”

“As live albums go this one has to be right up there with some of the recent best. Having excellent songs is a good start but to be able to translate those tracks into the live arena this well takes some real skill and Circuline have that in spades.”

For the full review:
https://www.progradar.org/index.php/2018/08/16/review-circuline-circulive-majestik-by-progradar/

Thank you so much, Esther Kessel-Tamerus, for the great review of the CircuLive::Majestik CD/DVD, rating it an 85/100!

“Surely rocking….captivating, surprising, and experimental in nature…epic…sparkling in terms of performance…with this release, Circuline proves that they are a solid live band. (85/100)”